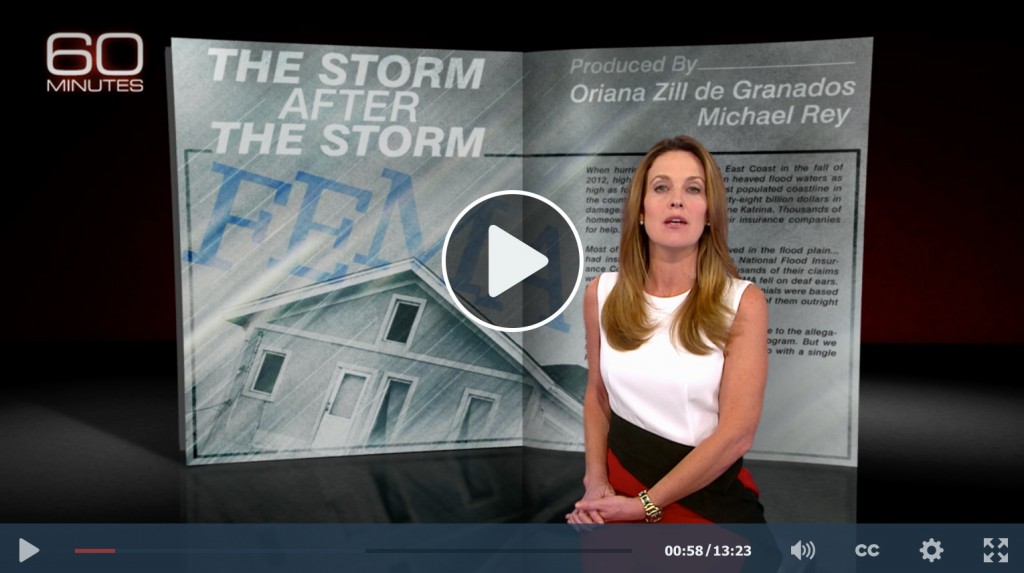 As the floodwaters recede from southeast Texas and Louisiana, Hurricane Harvey leaves behind a historic residue of injury, death, and destruction.
But, as we first reported some two and a half years after Hurricane Sandy devastated parts of the East Coast, Sandy’s victims were hit by another disaster — we called it “the storm after the storm.”

Many people said they were cheated out of their insurance claims.  Thousands of claims remained unresolved for years, and there was evidence that many homeowners were victims of apparent wide-scale fraud — where original damage reports were later changed to make it look like the damage wasn’t as bad.

Hurricane Sandy damaged or destroyed hundreds of thousands of homes and rearranged neighborhoods. Long Beach, New York, was one of them. This was Bob Kaible’s house the next day. The yellow one, with a sand dune blocking his front door.

Bob Kaible: The beaches decided that they didn’t want to be there anymore and they came to pay a visit. And that’s what happened. And we got back to the house and we were devastated.

Sharyn Alfonsi: What was that like to walk into your house for the first time?

Bob Kaible: Everything that you worked so hard in your life to get is now gone.

Sharyn Alfonsi: But you had flood insurance?

Sharyn Alfonsi: Did you think you were OK?

Bob Kaible: Sure. You– I mean that’s what you pay insurance for.

The city condemned Kaible’s home, saying it was damaged beyond repair. The house had been knocked off its foundation. His insurance company, Wright Flood, sent an engineer to inspect the damage. Three weeks later, the Kaibles couldn’t have been more surprised.

The insurance company agreed to send someone back out to the house. Surprisingly, it was the same engineer, George Hernemar, who worked for a company called U.S. Forensic.

Bob Kaible: I said, “George, how could you write a report like that?” He goes, “It’s not my report.” I said, “What do you mean it’s not your report?” He says, “Wait here.” He goes to the trunk of his car, goes, picks up the report and brings it into the house. He says, “This is the report I wrote.”

Bob Kaible got out his phone and took a picture of George’s original report. It plainly said there was “structural damage” to the house. But this is the report the insurance company sent to Kaible when they denied his claim. Quote “not structurally damaged.” They said the damage was “long term”… meaning it existed before Hurricane Sandy.

The Kaible’s insurance company, Wright Flood, the largest provider of flood insurance in the country, paid him just $79,000 dollars of his $250,000 policy.

Bob Kaible’s house was torn down after he sold it for a loss and he believes it was because of a falsified engineering report. The photo Kaible took was solid proof for many other Sandy victims who were struggling with similar situations.

Sharyn Alfonsi: How many houses do you see that are empty?

Bob Kaible: On this block? Probably half of ’em.

The Kaible’s pleaded to a vice president at their insurance company and passed on their evidence. But the company denied full payment arguing subsequent reports supported them. With frustration as high as the watermarks in their home the Kaible’s filed a lawsuit.

That suit drew the attention of a Texas trial lawyer who had never been to Long Beach, but got on his plane in a hurry.

Steve Mostyn has won billions fighting insurance companies and when he heard about Bob Kaible’s case he says he had a gut-feeling the Kaible family wasn’t alone. Sure enough, he says his Houston office is now flooded with paperwork from victims of the superstorm.

Sharyn Alfonsi: Why would anyone do that?

Steve Mostyn: Save money. The biggest ticket item inside a claim, for a flood claim, is the structural damage. And so when they don’t pay for structural damage, they save hundreds of thousands of dollars on each claim.

Of the thousands of cases lawyer Steve Mostyn says he’s found, electrician John Mero and his wife Gail’s is the most revealing. Their house is in East Rockaway, New York.

Sharyn Alfonsi: What was this street like in the days, the day after Sandy?

John Mero: Well, the day after, it was like Armageddon.

The Mero’s house had to be torn down after the storm. Their insurance company paid them just $80,000 and now they’re buried in debt after rebuilding their home.

John Mero: I was like how can you tell me that you’re not gonna cover this, that I’m not gonna get the full amount of my insurance? I says, “You got my payments every month.” Said, “It’s time for you to pay and here’s what you’re gonna tell me?”

It was two years later that the Meros felt a second wave hit them, when the engineer who assessed their home after the storm called them out of the blue.

This is Andrew Braum, the engineer who could no longer stay silent.

Braum told us not only were changes made to his engineering reports, but he was asked to cover it up. He showed us the original report he’d written about the damage to John and Gail Mero’s house.

Andrew Braum: We assess in the conclusions hydrodynamic forces, hydrostatic forces due to the flood, caused a cracking and shifting throughout the foundation.

Sharyn Alfonsi: So you’re saying the flood caused this damage?

Andrew Braum: Correct. And then, in the revised or the altered report, it says, “Settlement due to consolidation of soil caused the foundation wall to crack.” That’s not what I wrote. It’s completely altered.

Braum inspected more than 180 homes after Sandy, working for a company called HiRise Engineering. After he discovered the changes made to the report he wrote about the Mero’s home, he went back to check all the copies of his original reports against the final copies that the homeowners received.

Sharyn Alfonsi: How many of those reports were doctored?

Andrew Braum: At least 175 of them or approximately 96 percent is the number that I calculated.

Sharyn Alfonsi: A hundred and seventy-five of your reports were doctored?

Andrew Braum: Correct. They were altered.

Sharyn Alfonsi: And the ones that weren’t changed?

Andrew Braum: The one’s that weren’t changed, interestingly, were ones where I recommended that no repairs are required.

Braum says HiRise Engineering pressured him to sign an affidavit saying he agreed with their final reports. He says he ignored the request and never did it.

Sharyn Alfonsi: Do you think they were trying to cover up something?

Sharyn Alfonsi: What do you think was going on?

Andrew Braum: They figured out that they altered all those reports. And they wanted to hurry up and have, they called me Braum, “Braum, get Braum to sign off on this quick.” So if Braum wasn’t thinking or if Braum didn’t care, he would just sign his name 200-something times, and they were off the hook. And that wasn’t happening with me.

Insurance companies have argued the reason the engineering reports were changed was to allow for a peer review process — a standard practice in the insurance industry.

Andrew Braum: Peer review to me would be amongst my peers of an equal-licensing or education level and review a report and discuss it. But not peer review when I send my final report and it’s changed without my knowledge. That’s not peer review.

In February 2015, the offices of HiRise engineering were raided by the New York attorney general’s office,  which was conducting a criminal investigation into HiRise as well as the insurance companies that hired them.

HiRise pleaded guilty to criminal charges. Wright Flood, and U.S. forensic declined our requests for an interview.  They have denied allegations of criminal activity and all three said they cooperated with the investigation. More than 2,000 Sandy victims have filed lawsuits in federal courts.

Steve Mostyn: You know we thought originally it might be one engineer, right. And then we find multiple engineers inside the same company. And as we dug into it, it’s other engineering companies, well, then you gotta start looking for a different common denominator.

And in this case, all of those companies are overseen by FEMA, the Federal Emergency Management Agency. More than 5 million homeowners living in designated flood zones all around the country are required to buy flood insurance policies backed by FEMA and taxpayer money.

Brad Kieserman was the new head of FEMA’s flood program when we first spoke to him. He’d been on the job just three weeks and he’d already had to answer to allegations of fraud and criminal activity at the expense of some of sandy’s hardest hit families.

Brad Kieserman: I’m not gonna sit here and conceal the fact that it happened. ‘Cause in the last three weeks, I’ve seen evidence of it.

Sharyn Alfonsi: You’ve seen evidence of what could be criminal activity by using unlicensed engineers?

Brad Kieserman: Yes, which is why I referred it to the inspector general.

Sharyn Alfonsi: When did FEMA learn that there may be a problem here, that fraudulent reports may be used to deny claims?

Sharyn Alfonsi: It was more than signals. This is a letter to FEMA in the summer of 2013 that clearly says that the person conducting, doing the inspections here wasn’t a licensed engineer. This is to FEMA–

The document, sent to FEMA, was an appeal from another family who felt badly cheated by their insurance company. In it, they provide proof that the engineer who inspected their home, working for the firm U.S. Forensic, was not licensed to work in New York.

Brad Kieserman: This upset me very much. Because this piece of information, had it been elevated in the agency would have been very helpful in helping us help people earlier–

Sharyn Alfonsi: Why wasn’t it elevated in the agency? I mean, this to me is the type of thing you run to the boss with.

Brad Kieserman: This would be the type of thing that I would run to the boss with. And I need to find out why that didn’t happen.

Brad Kieserman: As far as I know, no one at FEMA has ever done that.

But lawyers paid for by FEMA have gone after Sandy survivors in court, accusing them of fraud. Bob Kaible, who took the photo of his altered engineering report, was accused in court of stealing the report done on his own home, which he denies.

Sharyn Alfonsi: We have homeowners who went through the appeals process. And the attorneys who are being paid for by FEMA called them thieves, said they were trying to conduct fraud. Those are your dogs at the end of the leash. Do you take any responsibility for that?

Brad Kieserman: Yes, I take responsibility for the fact that when FEMA funds activities, the people who are getting paid by those funds need to behave in a professional, ethical manner.

Sharyn Alfonsi: So are you gonna make it right?

Brad Kieserman: I am. As you know, I’m doing everything I can in the midst of negotiations to try to make that right. Let’s face it. I don’t have unlimited authority. I can’t wave a magic wand and make all of this right for everyone.

Since we first reported this story FEMA created a review process and has settled many of the Sandy flood cases. Brad Kieserman left FEMA and is now overseeing relief operations for the Red Cross in the wake of Hurricane Harvey.